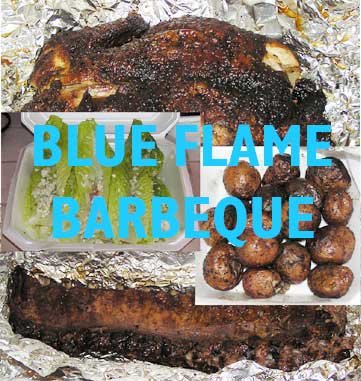 North Side of Route 101 at Mount Pleasant Road

One of the great signs of civilization is proper barbeque. For years, we at the western end of the continent have had to endure its lack. Then, one day, we were driving along 101 a bit east of Port Angeles and we saw smoke. We smelled fire and fat and cooking meat. There they were, where the old steamed burger trailer had folded, the cinderblock pits with metal lids and a little stand with a sign.

We stopped by to check the place out. The closer we got, the better it smelled. Now we could smell spices and hot meaty juices. The proprietor reached into the smoke and flames pulled out some foil wrapped samples. The chicken leg and short rack of ribs vanished before our eyes. The spice rub on the chicken and the pork ribs gave them a slight crispness, a resistance that the meltingly soft interior meat lacked. The chicken nearly collapsed at the touch leaving an array of succulent meat inside the collapsed skin. You could pull off ribs from the rack with the slightest of force.

Our first meal was an entire chicken and a full rack of ribs comprising two family meals for four. The side dishes were excellent. The fire roasted potatoes were as tender as the meat and the crisp Romaine lettuce salad with onions and blue cheese was quite refreshing. The rolls, made with shortening rather than butter, clocked in at very, very good, a notch shy of excellent.

Apparently, Blue Flame used to be Frickin' Chicken in Sequim, but their loss is our gain. Construction is ongoing. They are hoping to have an open/closed dining area in the next month or two. As for us, we are already planning to head back. They are experimenting with their hours. They had been open only on weekends, but are now open all afternoon and much of the evening seven days of the week. To make sure, give them a call at 360 452 6355. They are at the corner of Route 101 and Mount Pleasant Road just east of town.

UPDATED 7 June 2006 - Blue Flame is open at their new location, in a real building, across the street from their old location on Route 101.

UPDATED 22 March 2006 - Blue Flame is moving into real digs, just across the street, but still on the North side of Route 101. They've got the sign up, but no opening posted. We can hardly wait.